Biodigester - Get the Scoop on Poop! 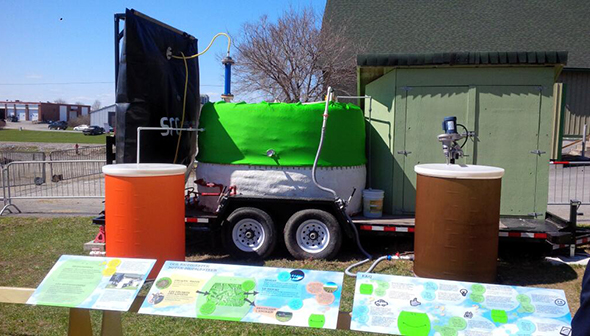 A biodigester is like an artificial stomach. It is fed with organic material (like manure), which is broken down by micro-organisms to produce a renewable energy called biogas.

Harnessing the Energy of Organic Waste

Found on a growing number of Canadian farms, biodigesters turn waste into energy.  They help offset operating costs and are an important element in the renewable energy mix.  Installed as part of the Energy Park: Nature at Work exhibition, the biodigester demonstrates one way renewable energy is being harnessed on farms.

Click on image to view it in full size.

Check out the new biodigester interpretation station at the Canada Agriculture and Food Museum.

Biodigesters produce a combustible gas. As with a propane tank or natural gas lines, safety precautions need to be taken. When used properly, biodigesters are very safe.

What are some of the ways in which biogas can be used?

Biogas can be used as a heat source for cooking or to heat water. It can also be converted into electricity or even refined to be used as fuel in vehicles.

Generally, they don’t produce any odours, although the small amount of hydrogen sulphide gas they generate can sometimes smell like rotten eggs. This biodigester has a filter to remove hydrogen sulphide.

How long does it take a biodigester to turn waste into energy?

Depending on feedstock and temperature, biodigesters can take 14-40 days to transform organic material into biogas. The Museum’s smaller biodigester will take about 21 days.

Can you run a vehicle on biogas?

Yes! The biogas would need to be further refined to remove carbon dioxide and other impurities. At that point, it is considered renewable natural gas and could be used to fuel a natural gas vehicle.

How much energy can a single cow produce in one day?

The manure from an average cow can produce enough biogas to generate about 2.3 kWh of electricity per day — enough to power your tablet for five months.

Video from the Saskatchewan Research Council: How a biodigester works

This demonstration biodigester has been provided by the Saskatchewan Research Council. The biodigester is part of the Let’s Talk Energy initiative at the Canada Agriculture and Food Museum. Transportation of the biodigester to the Museum was supported by the Canadian Gas Association.