Natural gas is a fossil fuel made from the remains of marine plants and animals compressed and heated over millions of years. This process creates both oil and gas. The oil forms at shallower depths and at lower temperatures. Deeper, where the temperature is high and the pressure greater, the deposits turn into gas.

Canada is the fifth largest natural gas producer in the world, with deposits both on land and offshore. Within Canada, 48% of individuals use natural gas to heat their homes more than any other fuel. In Canada, natural gas is also an important source of electricity production.

Canada has access to a broad and expanding supply of natural gas found in many parts of the country. Production is concentrated primarily in the western provinces (B.C., Alberta and Saskatchewan), and in offshore fields in Canada’s Maritimes, with minor production in Ontario and Northern Canada. In the east, New Brunswick is the largest producer of natural gas, having reserves amounting to 138B cubic ft. 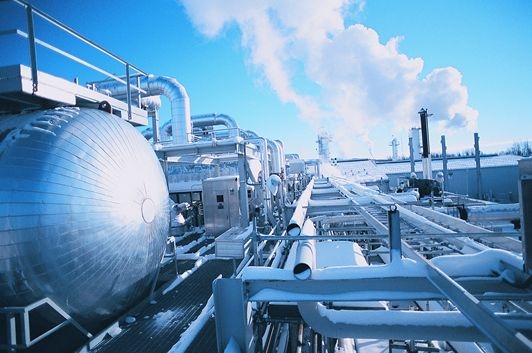 In Canada, natural gas is now the leading source of heat for homes and businesses, and continues to be adopted by more and more homebuilders and enterprises each year. High-efficiency furnaces, water heaters, clothes dryers, stoves, fireplaces, barbecues, heat pumps and integrated heating-cooling devices also operate on natural gas. The use of natural gas to generate electricity is one of the fastest growing uses of this fuel.

Natural gas is produced from both ‘conventional’ (easier to produce) and ‘unconventional’ (more difficult to produce) geological formations. Producers are actively exploring for and finding new supplies of conventional and unconventional gas across the country with deposits of shale gas being found in British Columbia, Alberta, Quebec and the Maritimes.  Shale gas deposits are also known to exist in Saskatchewan, Manitoba and Ontario.

Natural gas is extracted by drilling. The Canadian government regulates the spacing of gas wells to conserve this resource. Efficient and environmentally friendly directional drilling—drilling from different angles—allows access to a large deposit or multiple deposits at once from a single drill pad. 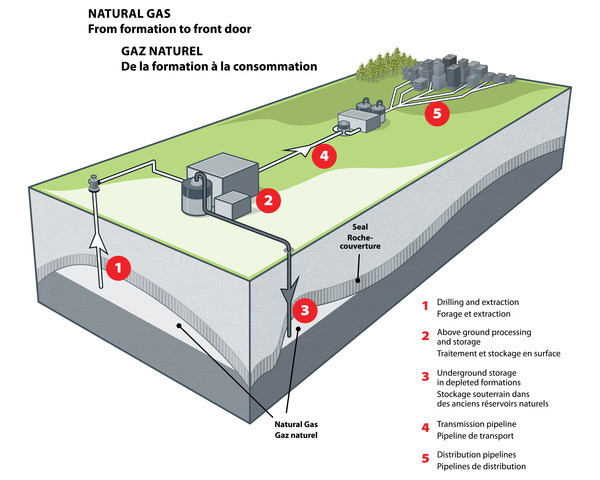 Natural gas straight from the well is often a cocktail of different gases, and each one has different properties and uses. Ethane, propane, and butane are used in heavy oil processing, petrochemical plants and as fuel. Methane heats residential and commercial buildings.

Like oil, natural gas is often found offshore. Canada has significant reserves off the coasts of Nova Scotia, Newfoundland and Labrador. The potential is enormous—the Canadian government expects to collect up to $ 2 billion from Nova Scotia’s Sable Project alone.

Natural gas is used extensively in residential, commercial, industrial and power generation applications. Natural gas is primarily used by residential and commercial users as a source of space heating, water heating, clothes drying, and in cooking applications. The industrial sector uses natural gas as a heat source, as a fuel for the generation of steam and as a feedstock in the production of petrochemicals and fertilizers. The electric power generation sector uses natural gas to produce electricity.

Natural gas has also been used to fuel vehicles since the 1930's. Most natural gas vehicles (NGVs) operate using compressed natural gas (CNG) or liquefied natural gas (LNG). CNG is more popular in light-duty passenger vehicles, while LNG is favoured in heavy-duty applications such as transit buses or locomotives.