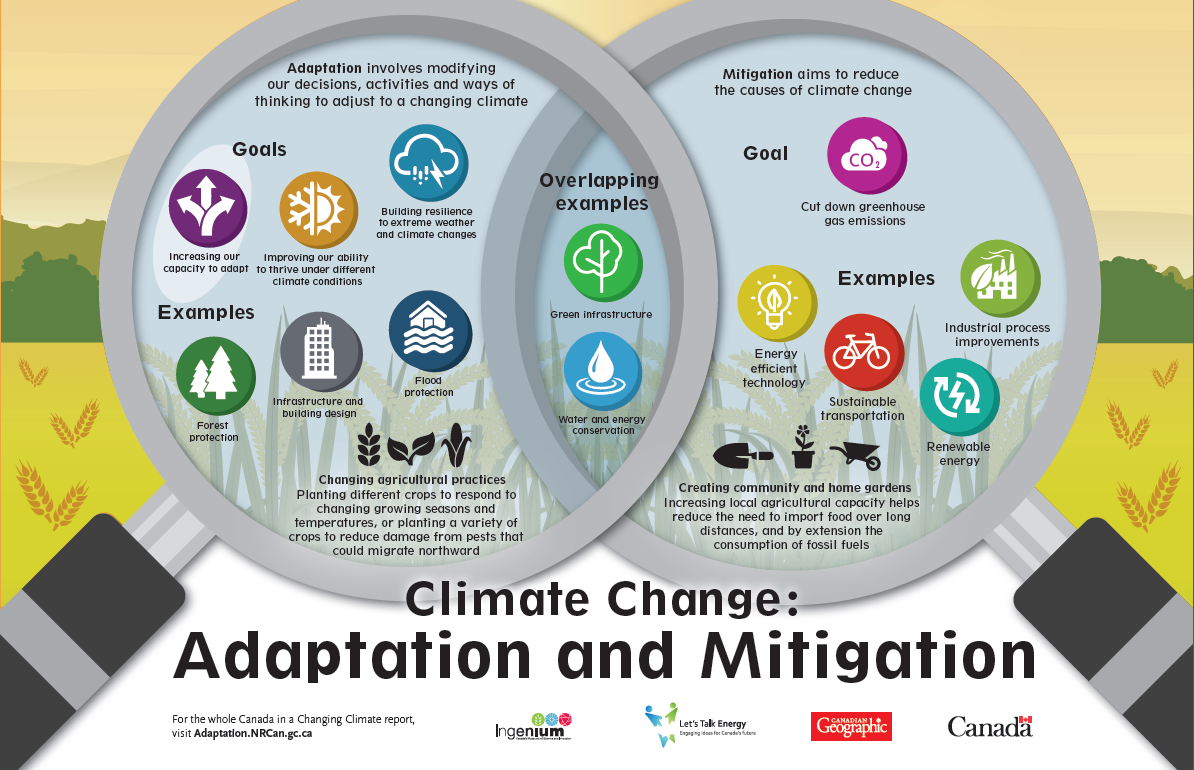 Society's response to climate change includes two fundamental strategies–adaptation, where Canadians respond to a changing environment, and mitigation, where efforts are made to reduce greenhouse gas (GHG) emissions. (http://www.statcan.gc.ca/pub/16-201-x/2007000/10542-eng.htm)

Adaptation is a necessary complement to mitigation in addressing climate change. Adaptation involves making adjustments in our decisions, activities and thinking because of observed or expected changes in climate, with the goals of moderating harm and taking advantage of new opportunities.

Forests can be significant greenhouse gas (GHG) sources and significant carbon sinks as a result of natural processes (such as fire, insect infestations and tree growth) and of human activities (such as harvesting, afforestation and deforestation).

Furthermore, it is still unclear what the trade-offs are when a land-use change such as afforestation occurs on a large scale. For example, the carbon benefits to be gained from afforestation must be weighed against the implications for the agricultural sector. Less land available for food-growing is one cost. That in turn creates another cost: namely, the need for more energy-intensive agricultural practices to meet production demand on a smaller land area—a likely outcome of which is an increase in carbon emissions.

Reducing deforestation is complicated to tackle. There are many different causes of deforestation across many sectors such as agriculture, municipal development, mining and energy. This means that policies to address deforestation must often be developed on a sector-by-sector basis. What is clear, however, is that where deforestation is reduced, the immediate outcome is reduced GHG emissions. (http://www.nrcan.gc.ca/forests/climate-change/13097) 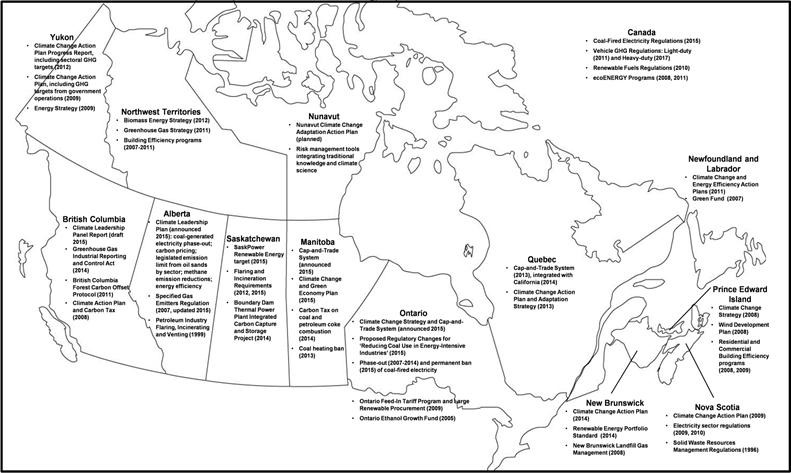 Selected Canadian examples:
• Hunters in the Arctic have increased the use of the global positioning systems to assist navigation in unpredictable or challenging weather.
• Homes and cottages are being built farther back from the coast.
• The community of Arctic Bay, NU, has shifted a portion of its narwhal quota from spring to summer hunts to reduce risks associated with ice break-up conditions, and to increase chances of hunting success.
• Residents of Pointe-du-Chêne, NB organized an emergency shelter in response to increasing flooding risk, and lobbied elected officials for less vulnerable road access.
• Thermosyphons, self-powered refrigeration devices, have been used in the construction of several major infrastructure projects in the North to induce artificial cooling of permafrost under warming conditions.
• Agricultural producers are purchasing crop insurance to offset losses caused by inclement weather.
• The town of Vanderhoof, BC is engaged in a vulnerability assessment pilot project with the Canadian Forest Service with a specific goal of being able to plan adaptation to climate change.
• New Brunswick’s Coastal Areas Protection Policy establishes set-backs for permanent structures and could facilitate planned retreat. (http://www.nrcan.gc.ca/environment/impacts-adaptation/adaptation-101/10021)